#GivingTuesday is a global day of giving. Everyone, anywhere can participate! By supporting the documentary Beauty on the Wing your fully tax deductible gift directly enables us to create a final cut, contributes to the music and map rights, to the cost of festival submissions, promotion, and publicity. It’s easy to make a donation, just click the link above, which will take you to the Filmmakers Collaborative, my film’s fiscal sponsor.

Why does a documentary need a fiscal sponsor? A fiscal sponsor, in this case, the Filmmakers Collaborative, is a non-profit entity that enables a documentary filmmaker to raise funds and operate through an exempt sponsor. The sponsor manages the project’s money and reports to funders and tax agencies. Most importantly, contributors to the film can see how their gifts are being utilized towards the creation of the film.

Your voice is powerful. If you are unable to give this Giving Tuesday, please help support Beauty on the Wing by spreading the word through a Facebook share or a retweet. 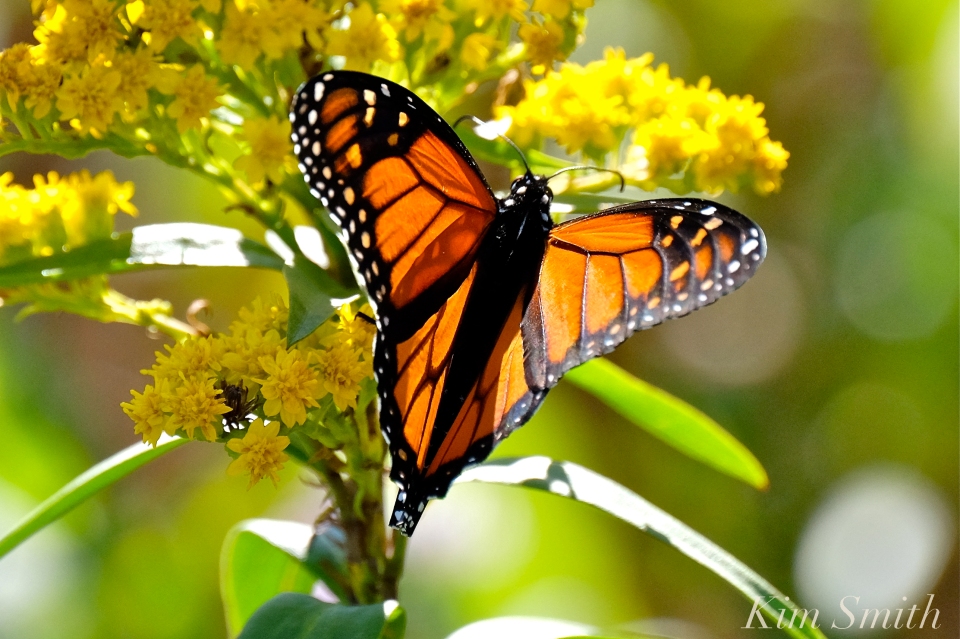 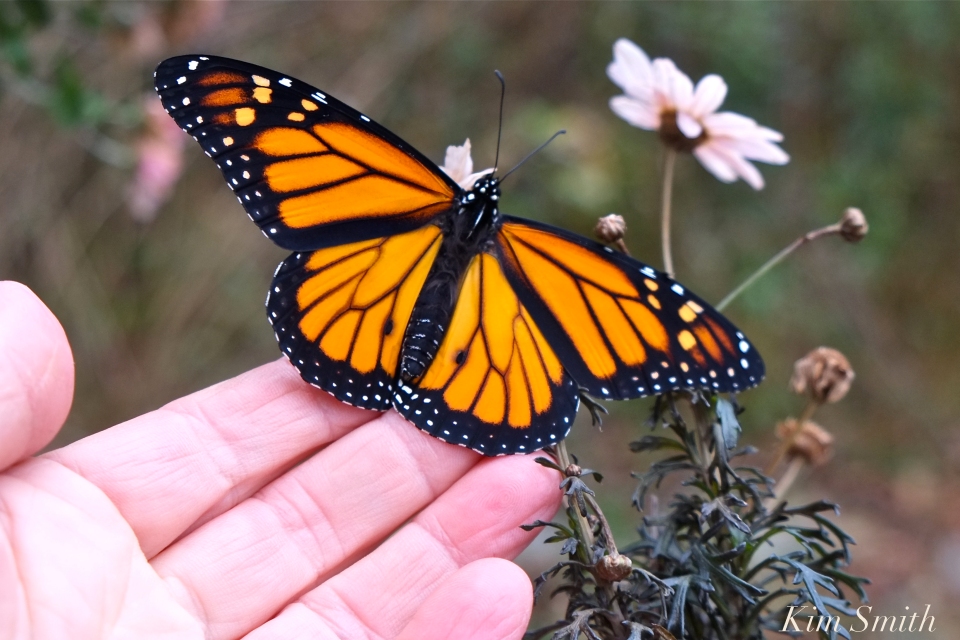 The Monarch last to eclose departed on Wednesday, November 15th. Although the air temperature was only in the low 40s when I left for work, the sun was shining. Our front porch faces southwest so it wasn’t long before his wings were warmed by the sun’s rays and away he flew. The forecast for parts further south along the East coast, the next leg of his journey–Westport, Long Island, and the New Jersey shore– looked promisingly mild. Thank you to my friend Patti Papows for the gift of this last little trooper.

We in the Northeast aren’t alone; I am reading reports about late comers from all around the United States, and even as far north as Toronto, Canada. So few Atlantic coast Monarchs were seen last year, do the great numbers this year portend of a permanent population increase? Bare in mind that the Monarchs were formerly counted in the billions when first discovered in the late 1970s, and now, forty years later, only millions.

A cold New England spring was offset by an unseasonably warm fall and that certainly helped the Monarchs (and myriad species of Lepidoptera). In response to the vast areas of farm acreage that no longer supports butterflies and bees, due to the use of Monsanto’s Roundup Ready genetically modified seeds of corn, soybean, and sorghum, people all across the U.S. are planting milkweed, creating pollinator habitats, and finding alternatives to pesticides and herbicides. 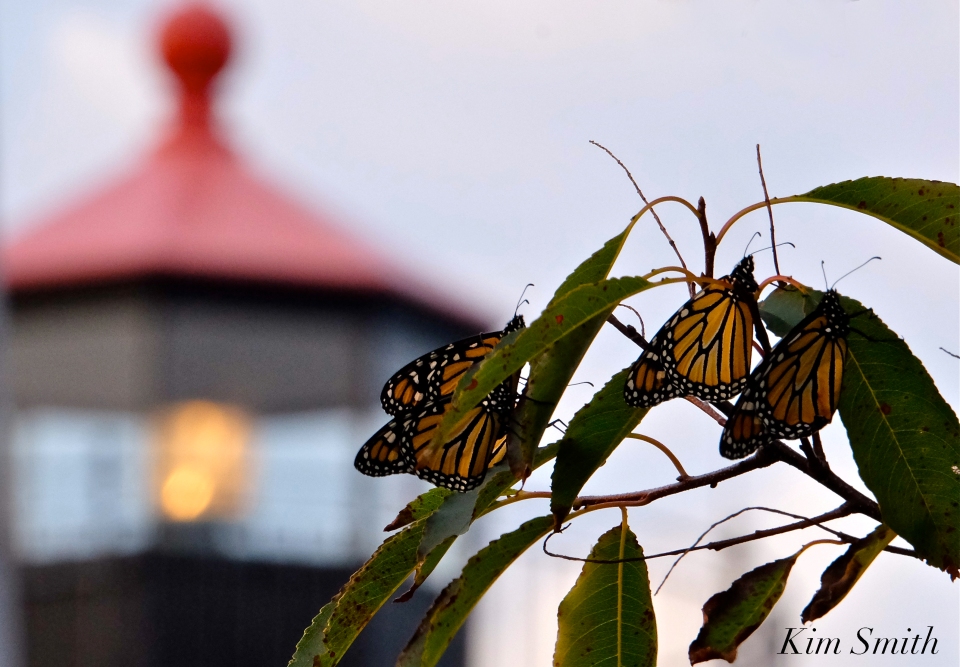 With Thanksgiving only a few days away I am writing with the deepest appreciation and gratitude to my community for your tremendous contributions to Beauty on the Wing. From donations of $5.00 to $10,000.00, from over 70 donors, to date we have raised $24,710.00. We are well on our way to reaching our goal! Your kind words, contributions, and friendships mean the world. We are going to make an outstanding, thoughtful and thought-provoking film about the Monarchs that along the way, through storytelling and cinematography, shines a beautiful light on Cape Ann.

Too cold for the last of our intrepid Monarchs to fly away today.

Our last little Monarch to emerge struggled to gain the warmth needed for takeoff. What is the minimum air temperature needed to allow Monarchs to fly? When at Cape May several weeks ago and witnessing a large overnight roost of butterflies, the air temperature the following morning was the same as Gloucester’s temperature this morning–low forties–but the sun was shining. No sunshine today, combined with the low temperature, made flying impossible. Monarchs cluster together in overnight roosts for warmth. Our little guy was all alone on an isolated branch and with temperatures expected to dip into the mid thirties, I brought him indoors for the night.

Why the late season stragglers? Warmer than usual fall temperatures allowed eggs and caterpillars to reach maturity when in colder years, freezing temperatures would have prevented development

Some Monarchs begin migrating southward as early as August. And as we have seen, during the warm fall season of 2017 in particular, as late as November. The Monarch migration continues until halted by freezing temperatures. This staggered migration is yet another chapter in the survival strategy of the Monarch’s life story. If all Monarchs began migrating at exactly the same time, a powerful storm or hurricane, such as Harvey or Irma, could have devastating consequences on a great many Monarchs.

Bees and butterflies, as we all know, pollinate flowers, but did you know that bats, songbirds, hummingbirds, wasps, beetles, moths, flies, midges, and even nasty mosquitoes also deliver pollen from plant to plant?

The eyes of the male Green-eyed Wasp are larger than the females, all the better to see her, and predators. Green-eyed Wasps are also known as sand wasps because females excavate burrowing nests in sand (as well as soil).

Male Monarch Butterfly flitting about our garden and drinking nectar from the Marsh Milkweed florets. 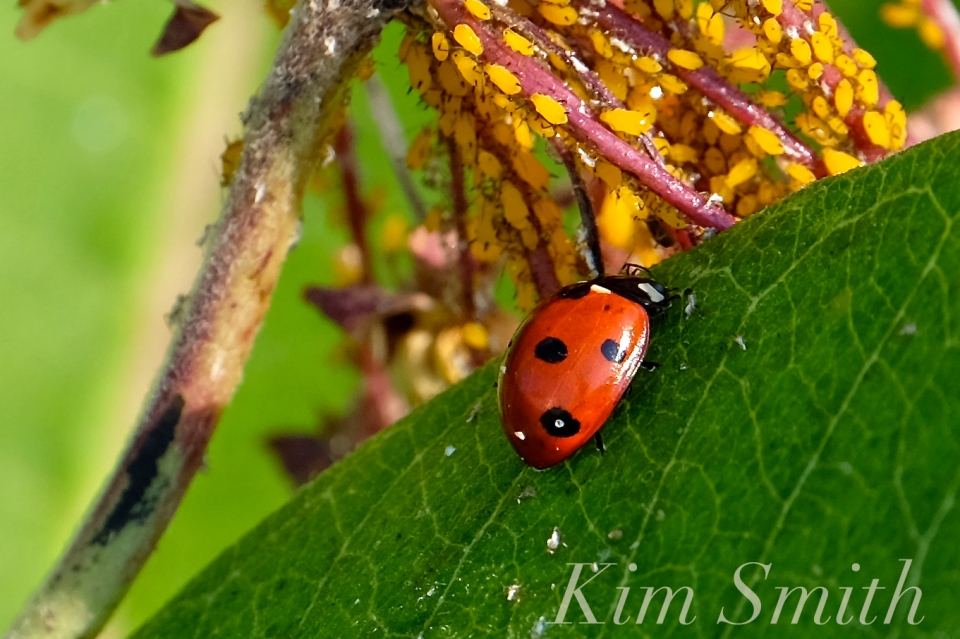 Notice the mass of orange Milkweed Aphids in the background. Lady Beetles are another pollinator super hero because they help milkweed plants by eating aphids.