Dear Friends of Beauty on the Wing,

I hope you are all doing well and fortunate enough to have good health.

After a brief cold snap we are having a beautiful Indian Summer here on Cape Ann. I hope you have the opportunity to get outdoors today and enjoy nature. Bird and butterfly migrations are well underway. At Parker River National Wildlife Refuge, rangers shared that they have never seen a migration such as this year’s, with over 180 species sited at the refuge this past week. The birds appear to have benefitted from decreased human activity over the past seven months. On the other hand, the Atlantic Coast Monarch migration seems stalled or nonexistent. Perhaps we will have a late, great migration as we did several years ago. And there are some positive signs for the butterflies, especially through the Mississippi Flyway as Monarch Waystations further north, such as the one at Point Pelee have been reporting that the Monarch migration is doing well. I’ve seen Monarchs migrating through Cape Ann in good numbers as late as the second week of October, so we’ll be ever hopeful.

Good news to share -the page for Beauty on the Wing is up on American Public Television World Wide! Here is the link, including information with a link on how to license Beauty. The page looks great and the line-up of films, stellar. We are so honored to be included in this fine catalogue of Science, Health, and Nature Programming! 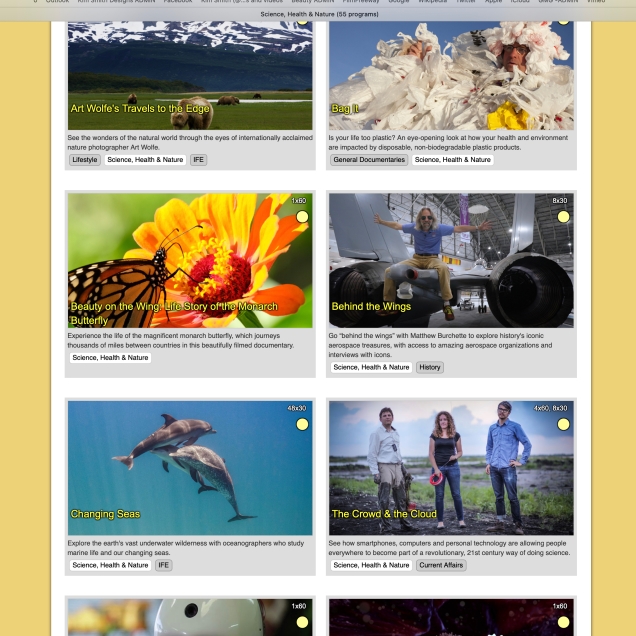 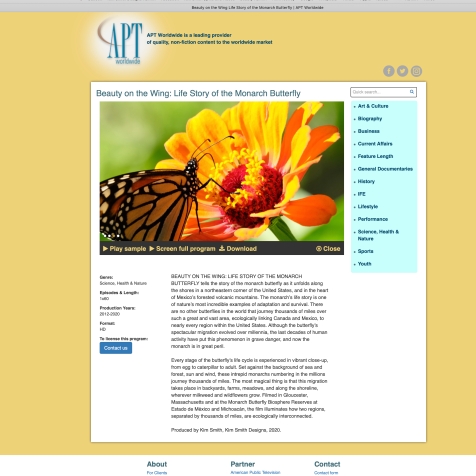 And more super good news to share – Beauty on the Wing has been accepted to the Boston International Kids Film Festival! This is an outstanding festival for kids, by kids, and about kids and is organized by a dynamic group of women: Laura Azevedo, Kathleen Shugrue, and Natalia Morgan. A complete list of films for the 2020 BIKFF will be posted in the upcoming days, along with information on how the festival will be organized for safe viewing during the pandemic.

I have been following (or become enchanted is a more accurate description) a small flock of Bobolinks. Click here to read a story posted on my website: Bobolinks Amongst the Sunflowers. While reading about Bobolinks, I came across a link to The Bobolink Project, a truly worthwhile organization. The Bobolink Project habitat conservation plan not only helps Bobolinks, but many species of declining grassland birds.

The sun is coming out and the temperature still summery. Stay well and enjoy the day! 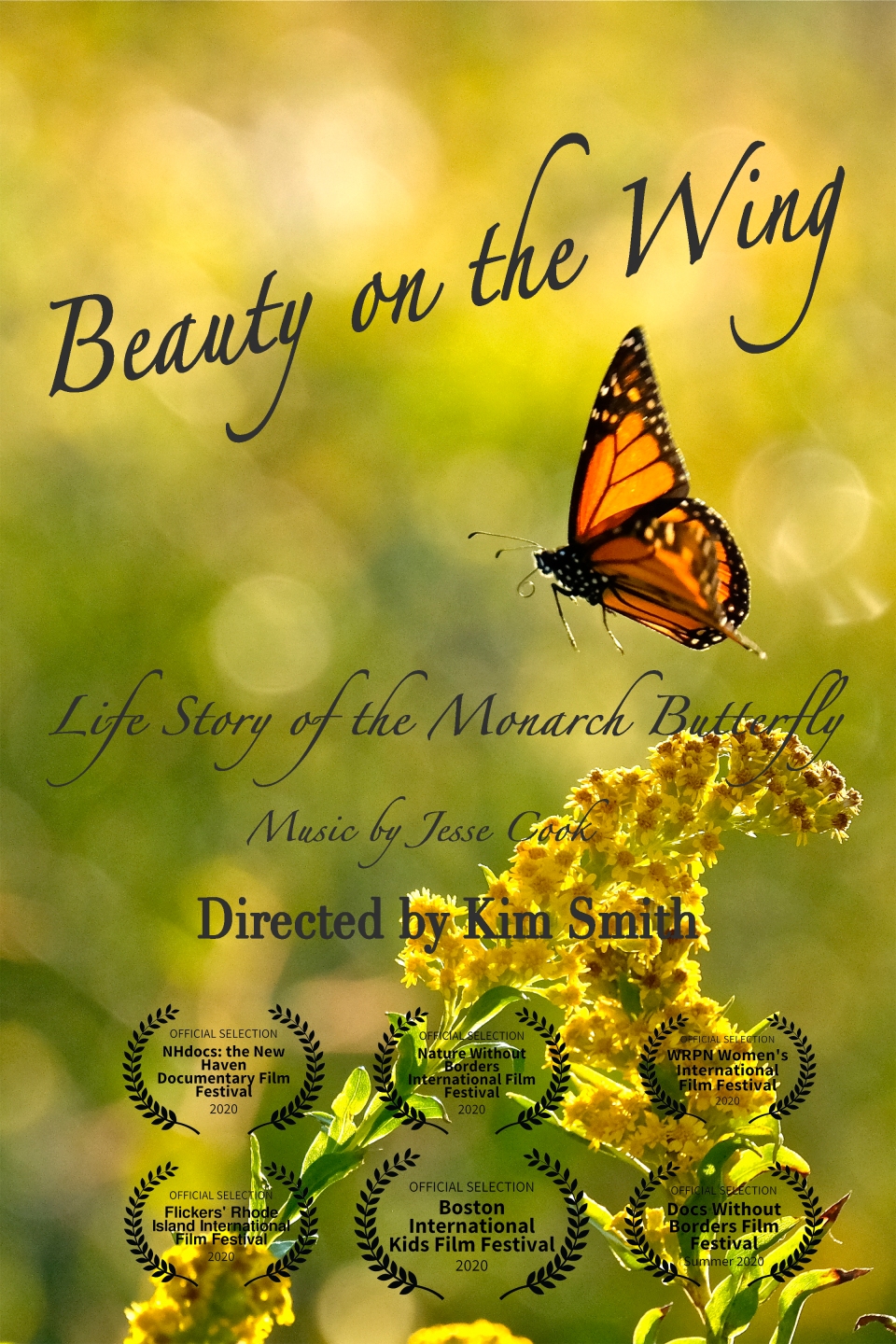 Winds from the north brought a tiny kaleidoscope of Monarchs to our shores over the weekend. Isn’t that a wonderful official word for a group of butterflies! A bunch of caterpillars is officially called an army.

Will there be more waves of Monarchs passing through? Time will tell. Along the Atlantic Coast Flyway, we’ve seen far fewer butterflies so far this year, especially when compared to last year’s numbers. Keeping my hopes up though 🙂 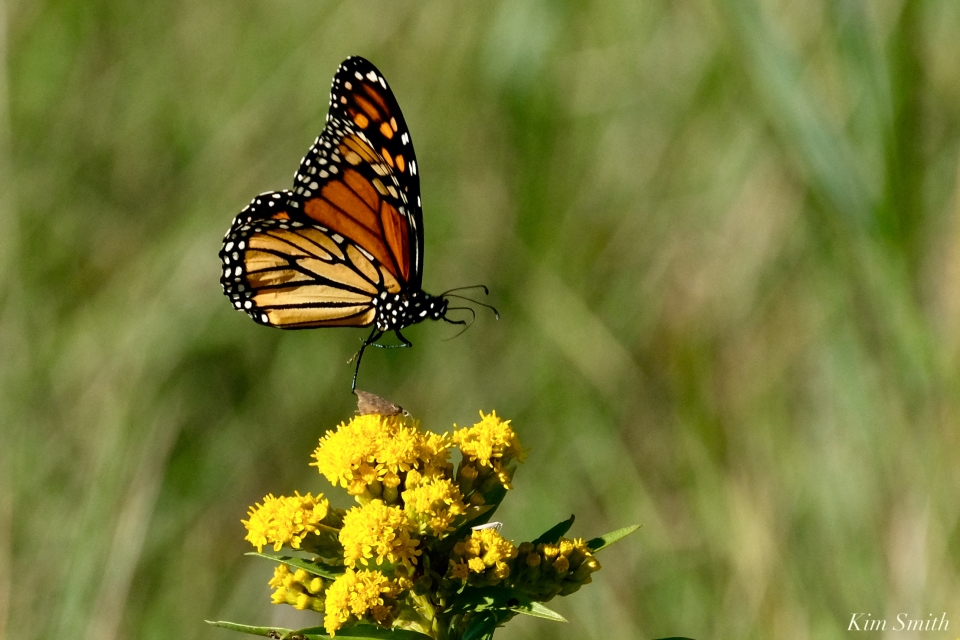 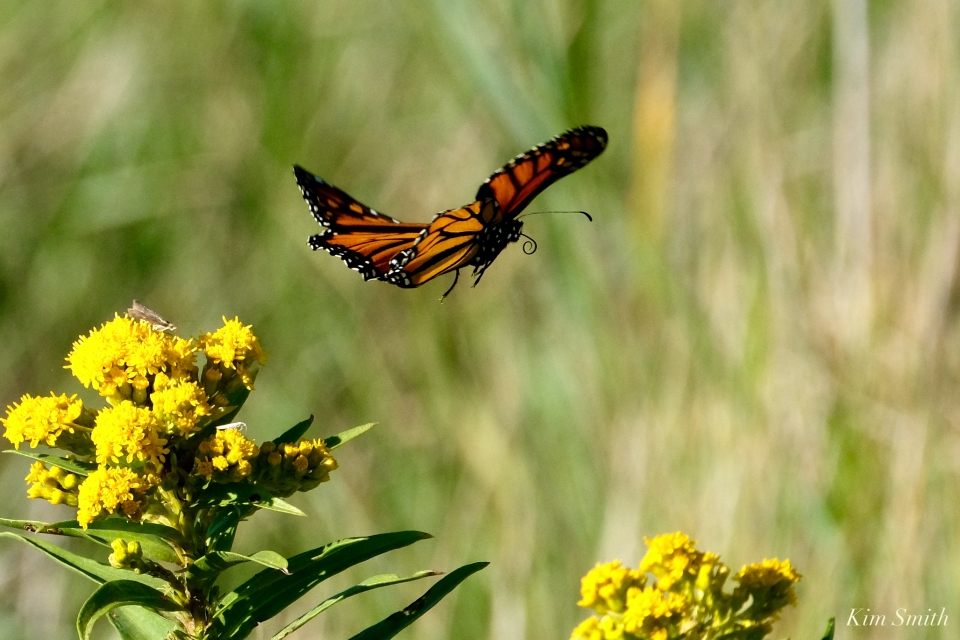 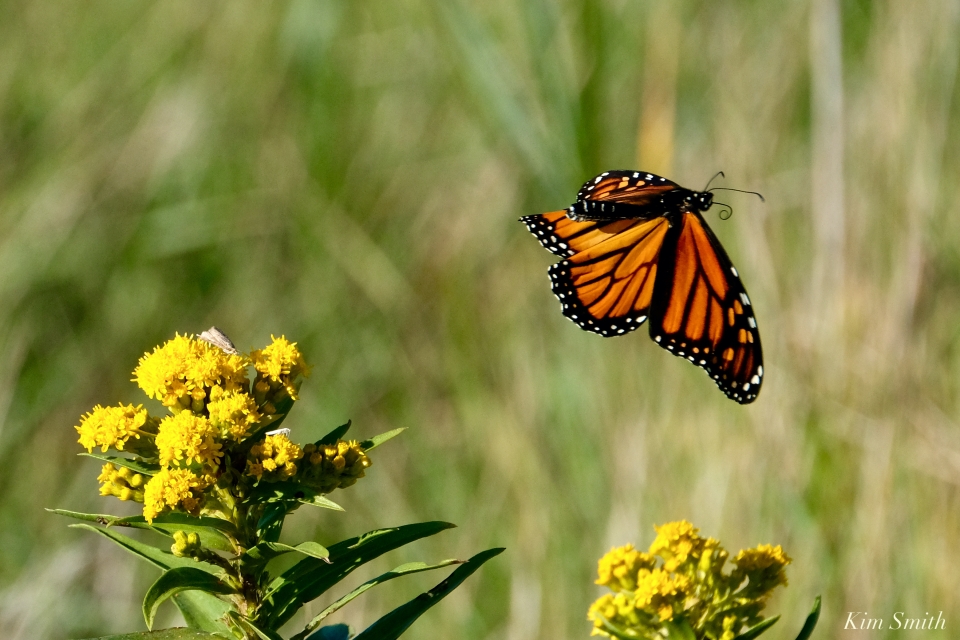 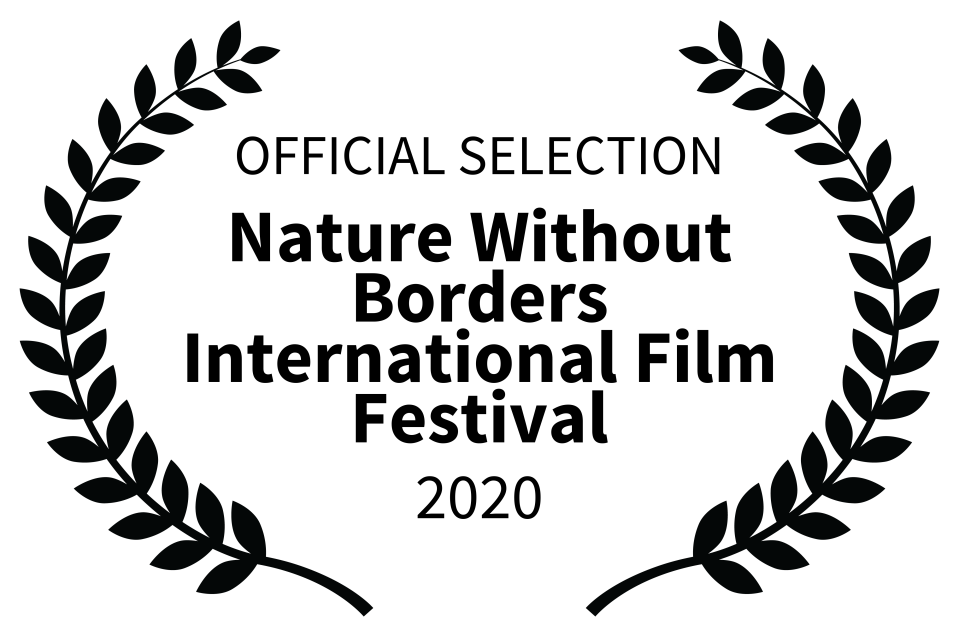 I am so excited to share that the New Haven Documentary Film Festival begins on Tuesday the 18th. Because of the pandemic, much of the festival is online. Beauty on the Wing will begin airing at 11am on the 21st. There is also an interview about the making of Beauty on the Wing with myself and Karyl Evans.

Very unfortunately  and yet another consequence of the pandemic, the films in the program are geoblocked, which means they can only be viewed in Connecticut. Not to worry though, as soon as it is safe, we will have a local premiere and I am very much looking forward to that!

For any of my readers in Connecticut, if you are interested in purchasing a ticket, please GO HERE

See the NHdocs 2020 trailer here (with lots of clips from Beauty on the Wing!) –

The Gloucester Stage Company’s preview screening of my forthcoming documentary Beauty on the Wing: Life Story of the Monarch Butterfly has been postponed until May. We don’t have a set date yet and I will keep you posted.

If you have already purchased tickets you will be contacted by the GSC box office. You will have the option of a full refund or the ticket my be used at the screening on its new date.

Please forgive any inconvenience and thank you for understanding ❤

THEIR ROUTE FROM CANADA IS THREATENED BY OVERUSE OF HERBICIDES AND CLIMATE CHANGE, AMONG OTHER FACTORS 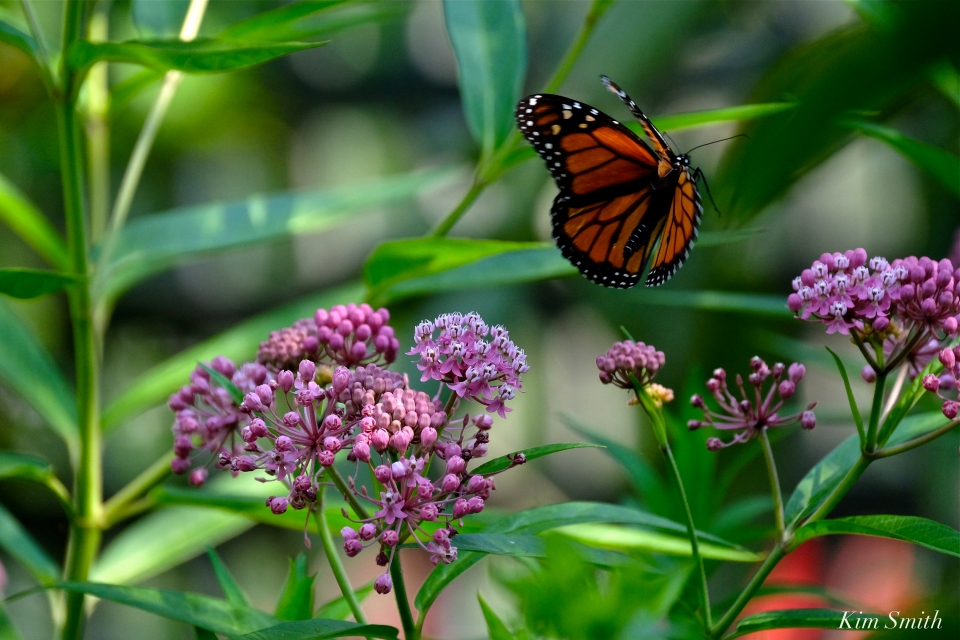 Mexico, the United States and Canada must share responsibility for the conservation of the monarch butterfly, according to a biologist who warns that the insect’s North American migratory path is at risk of becoming a thing of the past.

Víctor Sánchez-Cordero, a researcher at the National Autonomous University’s Institute of Biology and Mexico’s lead representative on a tri-national scientific committee that studies the monarch, said that the butterflies’ route from southeastern Canada to the fir tree forests of Michoacán and México state is under threat.

He blames the excessive use of herbicides, changes in the way land is used, climate change and a reduction in the availability of nectar and pollen.

“The commitment to conserve this migratory phenomenon not only focuses on Mexico; it’s a shared responsibility between our country, Canada and the United States,” Sánchez-Cordero said.

The researcher, who along with his team developed a system to monitor the migration of the monarch, said that there is a misconception that the most important – almost exclusive – factor in ensuring the continuation of the phenomenon is the conservation of forests in the Monarch Butterfly Biosphere Reserve (RBMM), located about 100 kilometers northwest of Mexico City.

That idea “has placed great international pressure on Mexico,” Sánchez-Cordero said before adding that he and his team published an article in the journal Frontiers in Environmental Science that shows that the decline in the number of monarch butterflies migrating to Mexico is not due to deforestation in the RBMM.

Deforestation has been drastically reduced in the past 10 years but butterfly numbers have continued to decline, he said.

“The dramatic reduction in the density of monarch butterflies that arrive at overwintering sites in Mexico doesn’t correlate with the loss of forest coverage, which shows that this factor is not responsible for the population reduction. … Other hypotheses to explain the decrease must be sought,” Sánchez-Cordero said.

One possible cause for the decline, he explained, is that the excessive use of herbicides is killing milkweed, a plant that is a main food source for monarch butterflies and on which females lay their eggs. Less nectar and pollen in the United States and Canada as a result of deforestation is another possible cause, Sánchez-Cordero said.

He added that large numbers of migrating butterflies have perished in Texas and the northeast of Mexico due to drought linked to climate change.

To conserve the migratory phenomenon of the monarch – butterflies fly some 4,500 kilometers to reach Mexican forests from Canada over the course of three to four generations – a network of conservation areas along their migration routes needs to be developed, Sánchez-Cordero said. He also said that the routes followed by the butterflies should be declared protected areas.

“A new conservation paradigm is needed. … It’s something that we [Mexico, the United States and Canada] should build together,” the researcher said. 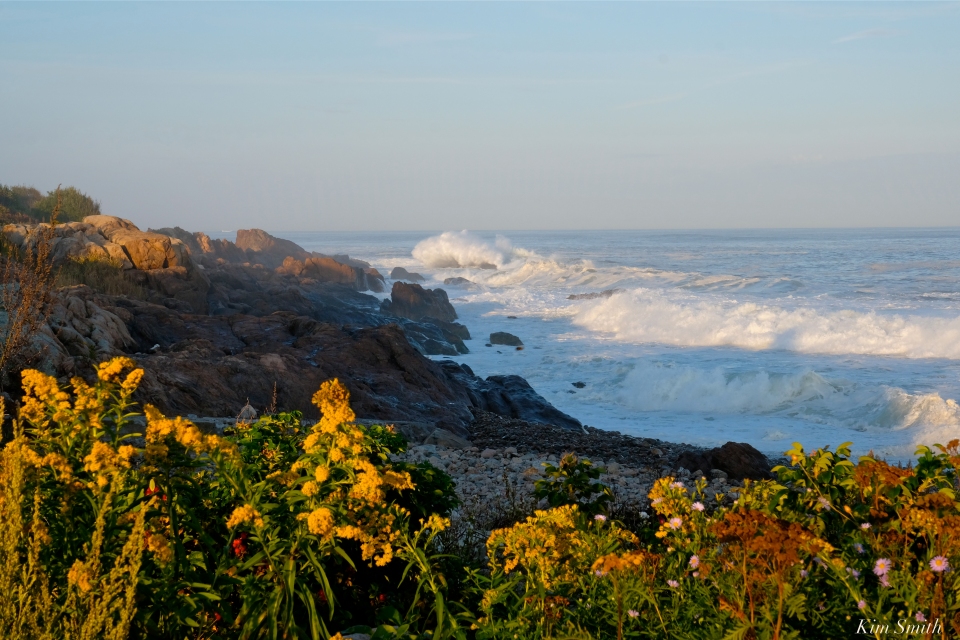 Thank you so much dear butterfly friends for sharing Beauty on the Wing trailer. As I am writing this post, the new trailer just hit 600 views. That is quite wonderful as it has only been three days since we first shared the trailer and because unlike YouTube where if you watch only a few moments of a video it counts as a hit, with Vimeo, you have to watch it all the way through to be counted. By sharing the trailer and generating many views, you are truly helping when festival judges are viewing our submission. 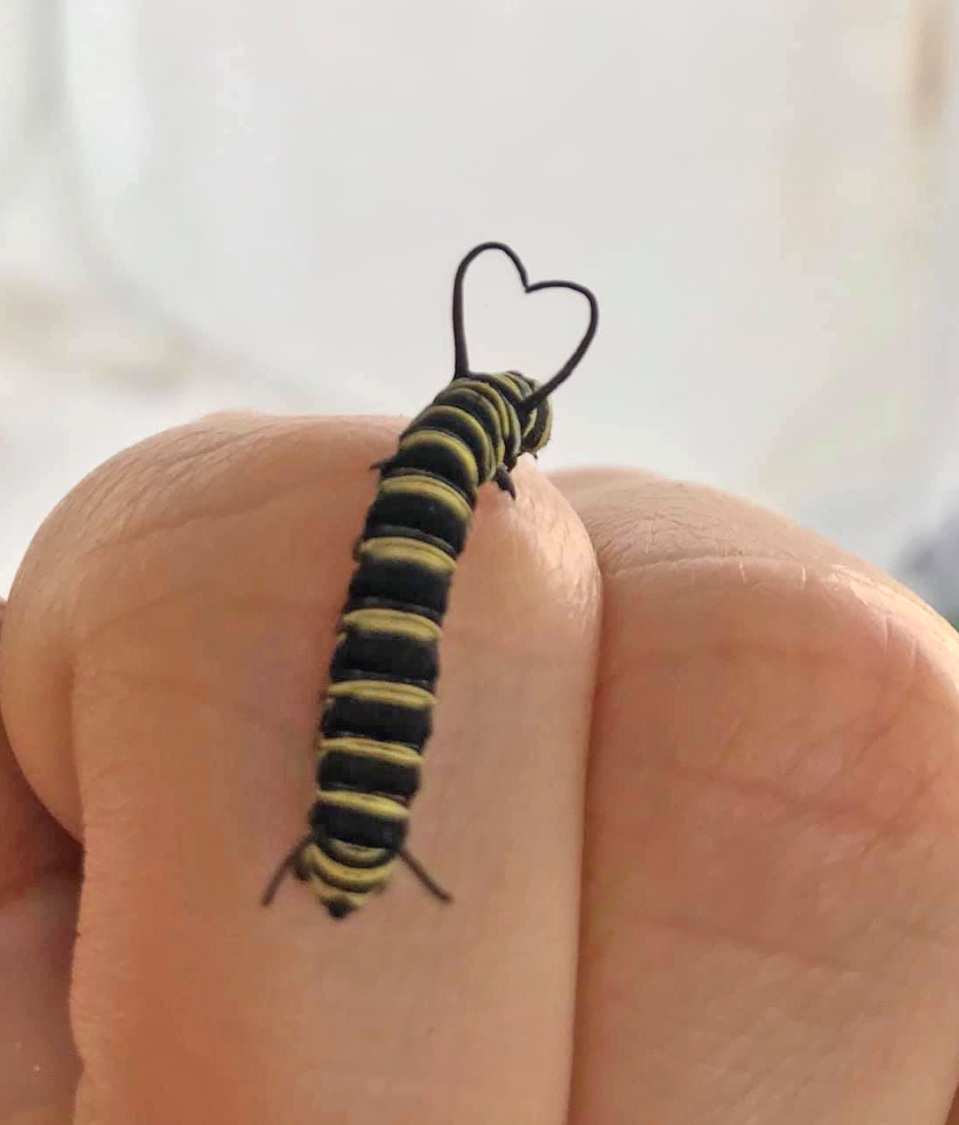 I couldn’t resist sharing the above photo from Alisa Marie, a member of the terrific group “The Beautiful Monarch,” administered by the very knowledgeable Holli Hearn.

You are receiving this note because you donated generously or because you have been a friend and supporter in one manner or another to my documentary Beauty on the Wing: Life Story of the Monarch Butterfly.

I am beyond excited to share that we will be picking up the masters this week from the color and sound editing studio, Modulus, which I have been working with these many months. The film has come together beautifully. I think you will love the soundtrack by Jesse Cook and the new mix and voiceover recording. Because of several delays over the course of editing, I was able to include footage from the butterfly’s spectacular late winter exodus at Cerro Pelon, Mexico, and from the exquisite Monarch migration that took place along the shores of Cape Ann this past fall.

Currently I am submitting Beauty on the Wing to film festivals. Over the weekend I sent in no less than 18 submissions. Some festivals we’ll hear back from within a few weeks, others it may take several months. In the meantime, I am learning about film distribution and am working on scheduling a sneak peek preview screening for all my donors and will keep you posted about that.

Here is the new short trailer. I hope you will have two minutes to view and also, if you could please share. The old trailer has thousands of views and believe it or not, number of views is important to festival organizers and film distributors So please share. Also, I am creating a longer, more detailed trailer and will send that along later this week.

A most heartfelt thank you for your generosity and your kind support. I am so grateful.

P.S. Very rough draft of a poster- I am looking for a graphic designer who can help with some ideas I have for posters, postcards, and other promotional materials. Please let me know if you have someone you love to work with. Thank you!

The line on the map above isn’t rain, but from butterflies and dragonflies. We can surmise based on what has been happening along our shores that the species you see in this front are most likely a swirl of Monarchs, Painted Ladies, and Green Darner Dragonflies. The north easterly winds are carrying the insects south.

Below is a map showing autumn and spring migrations. The orange arrow is the fall migratory route of the Monarchs.

Anything red represents rain. Blue indicates more unusual shapes, often biological in origin. Notice behind the “butterfly front” the large spattering of blue. That’s where the insects were. (GR2 Analyst) Beauty on the Wing
Blog at WordPress.com.